Adult Hodgkin lymphoma is a disease in which malignant (cancer) cells form in the lymph system.

Adult Hodgkin lymphoma is a type of cancer that develops in the lymph system. The lymph system is part of the immune system. It helps protect the body from infection and disease.

The lymph system is made up of the following: 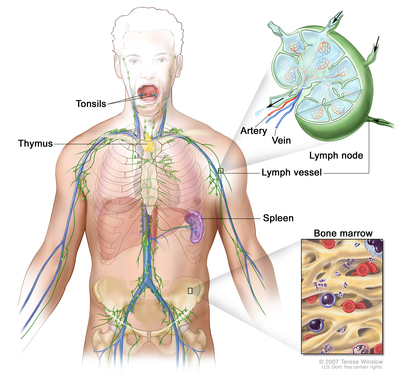 Lymph tissue is also found in other parts of the body, such as the lining of the digestive tract, bronchus, and skin.

The two main types of Hodgkin lymphoma are classic and nodular lymphocyte-predominant.

These and other signs and symptoms may be caused by adult Hodgkin lymphoma or by other conditions. Check with your doctor if you have any of the following symptoms that do not go away:

Tests that examine the lymph system and other parts of the body are used to help diagnose and stage adult Hodgkin lymphoma.

The results of the tests and procedures below also help make decisions about treatment.

These tests may include:

For pregnant women with Hodgkin lymphoma, imaging tests that protect the unborn baby from the harms of radiation are used. These include:

The prognosis and treatment options depend on the following:

For Hodgkin lymphoma during pregnancy, treatment options also depend on:

Adult Hodgkin lymphoma can usually be cured if found and treated early.