"Paranasal" means near the nose. The para sinuses are hollow, air-filled spaces in the bones around the nose. The sinuses are lined with cells that make mucus, which keeps the inside of the nose from drying out during breathing. 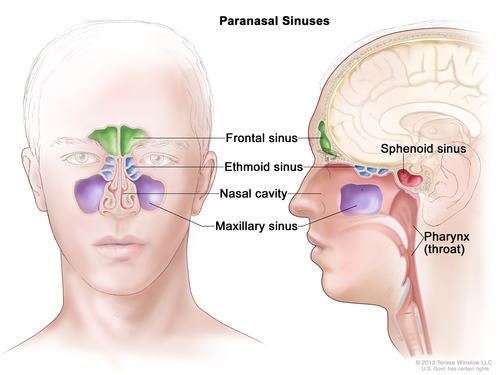 There are several para sinuses named after the bones that surround them:

The nose opens into the nasal cavity, which is divided into two nasal passages. Air moves through these passages during breathing. The nasal cavity lies above the bone that forms the roof of the mouth and curves down at the back to join the throat. The area just inside the nostrils is called the nasal vestibule. A small area of special cells in the roof of each nasal passage sends signals to the brain to give the sense of smell.

Together the paranasal sinuses and the nasal cavity filter and warm the air, and make it moist before it goes into the lungs. The movement of air through the sinuses and other parts of the respiratory system help make sounds for talking.

Paranasal sinus and nasal cavity cancer is a type of head and neck cancer.

Different types of cells in the paranasal sinus and nasal cavity may become malignant.

Other types of paranasal sinus and nasal cavity cancer include the following:

Being exposed to certain chemicals or dust in the workplace can increase the risk of paranasal sinus and nasal cavity cancer.

Signs and symptoms of paranasal sinus and nasal cavity cancer include sinus problems and nosebleeds.

The following tests and procedures may be used:

The prognosis and treatment options depend on the following:

Paranasal sinus and nasal cavity cancers often have spread by the time they are diagnosed and are hard to cure. After treatment, a lifetime of frequent and careful follow-up is important because there is an increased risk of developing a second kind of cancer in the head or neck.