Carcinoma of unknown primary (CUP) is a rare disease in which malignant (cancer) cells are found in the body but the place the cancer began is not known.

Sometimes doctors find where the cancer has spread but cannot find where in the body the cancer first began to grow. This type of cancer is called a cancer of unknown primary (CUP) or occult primary tumor. 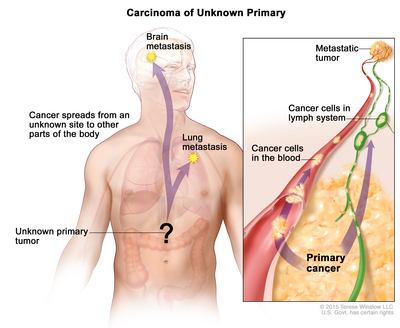 The primary cancer (the cancer that first formed) may not be found for one of the following reasons:

The signs and symptoms of CUP are different, depending on where the cancer has spread in the body.

Sometimes CUP does not cause any signs or symptoms. Signs and symptoms may be caused by CUP or by other conditions. Check with your doctor if you have any of the following:

The following tests and procedures may be used:

If tests show there may be cancer, a biopsy is done.

If cancer is found, one or more of the following laboratory tests may be used to study the tissue samples and find out the type of cancer:

The cells in the body have a certain look that depends on the type of tissue they come from. For example, a sample of cancer tissue taken from the breast is expected to be made up of breast cells. However, if the sample of tissue is a different type of cell (not made up of breast cells), it is likely that the cells have spread to the breast from another part of the body. In order to plan treatment, doctors first try to find the primary cancer (the cancer that first formed).

Tests and procedures used to find the primary cancer depend on where the cancer has spread.

In some cases, the part of the body where cancer cells are first found helps the doctor decide which diagnostic tests will be most helpful.

The following tests and procedures may be done to find where the cancer first began:

Sometimes, none of the tests can find the primary cancer site. In these cases, treatment may be based on what the doctor thinks is the most likely type of cancer.

The prognosis (chance of recovery) depends on the following:

For most patients with CUP, current treatments do not cure the cancer. Patients may want to take part in one of the many clinical trials being done to improve treatment. Clinical trials for CUP are taking place in many parts of the country. Information about clinical trials is available from the NCI website.